No information for Hallmark. Large version of this map HERE

Crosby Town Centre will be part of the bidding for the £5m Mayoral fund for Town Centres announced 1st July. That is £1m to each  member LA of the Liverpool Combined Authority.

Work has commenced on this years Christmas Lights events and tree/decorations. So far we have eleven acts wanting to take the stage.

Crosby in Bloom and staff from the George pub have been planting flowers around the village trees. They would ask traders to assist with keeping them watered. CIB have also done a great job maintaining the WW1 commemorative D-bed by the Roundabout and the Crosby Lions have done excelent work on their various displays. Judging for awards from the Royal Horticultural Society is this week from Monday 10th. 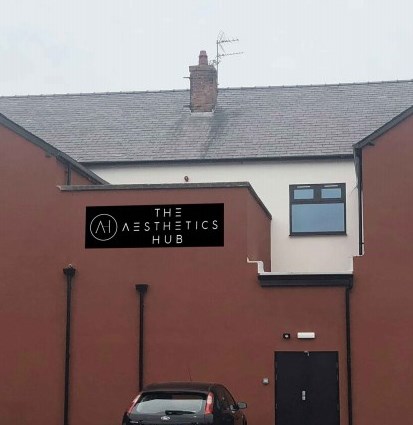 Electrician to investigate problems with Festoon and tree lights 15th June. Traders have asked for them to be lit up during the World Cup.

Crosby In Bloom Volunteers have planted up the bases of ten street trees with plants donated by Martin at Georges.

Work on Peacocks shopfitting is forging ahead.

10a Moor Lane Vets expected to open in November.

Benches with dedicated plaques to be returned from storage and re-positioned adjacent to Glenn Buildings.

The George Pub have installed bunting right through the Village containing the flags of every Nation competing in the World Cup. They have also begun planting flowers around the trees.

date 14/5Costa Coffee granted outside seating area. 3M into street. DC/2018/00411Peacocks have applied for signage and approval for first floor storage area at 10 Moor lane (New Build) DC/2018/00709BetFred have been granted change of use to Betting Shop.  on Unit 3 Glenn Buildings.North (Next to Blues) DC/2018/00410. Click graphic for PDF version.

New Costa opening Saturday
Card Factory Moved in and trading. Some complaints about the signage. Planning say they meet all legal requirements . St Modwen say Tenants will most always require proprietary/brand  signage but they  have restricted where that can be applied, this meets those constraints.
The new extension to Blues Bar was open for the first time on Saturday 5th May.

The remaining demolition screens. From the new shop posters there is only one GF unit left for lease:Unit 4. Price here 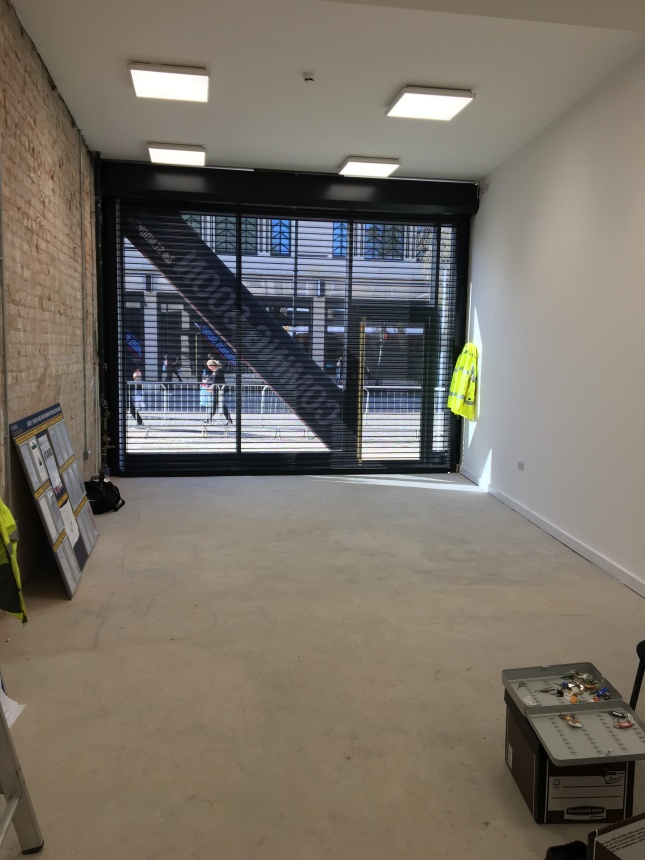 Units 3 is being fitted out for The Card factory 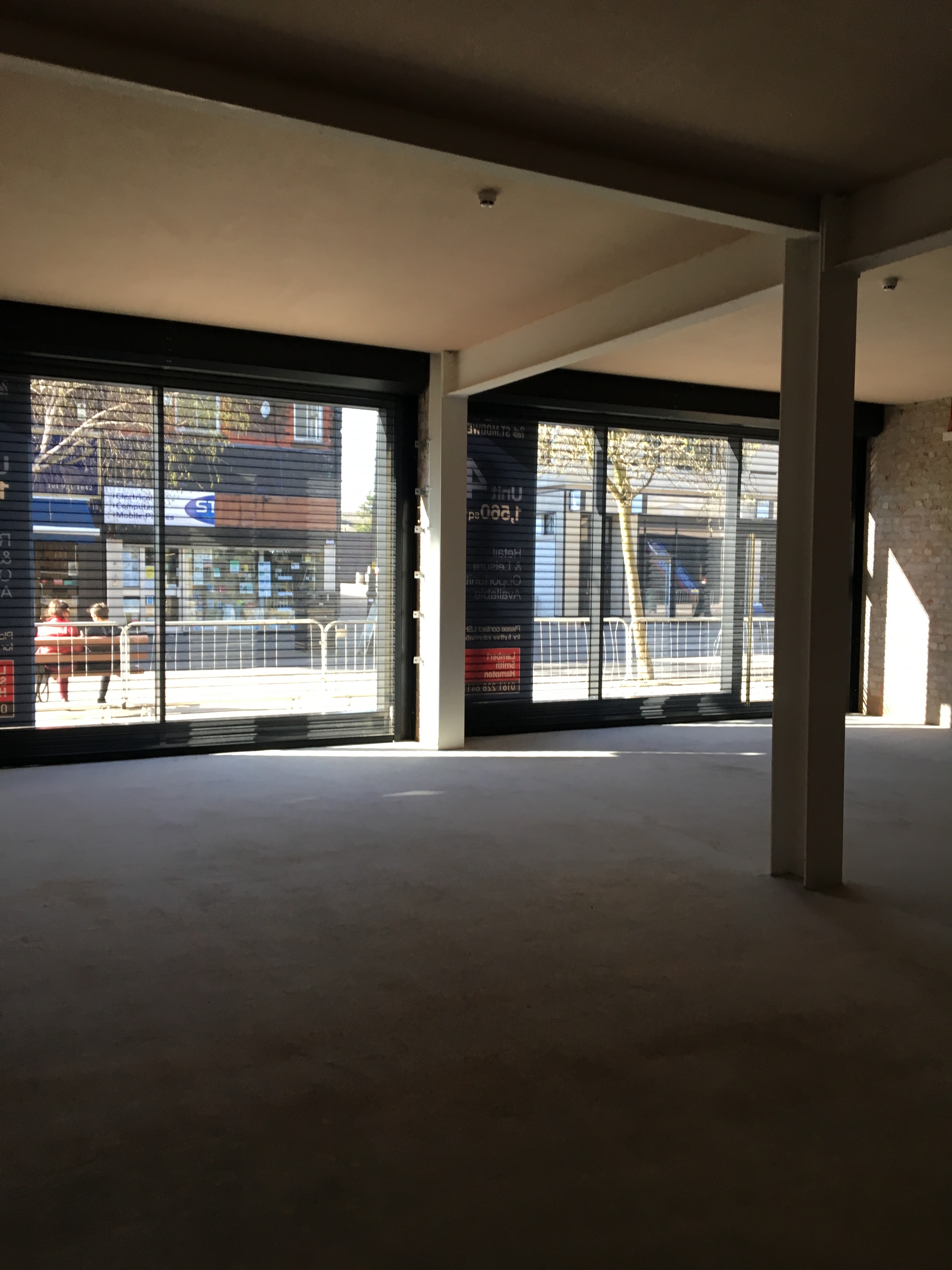 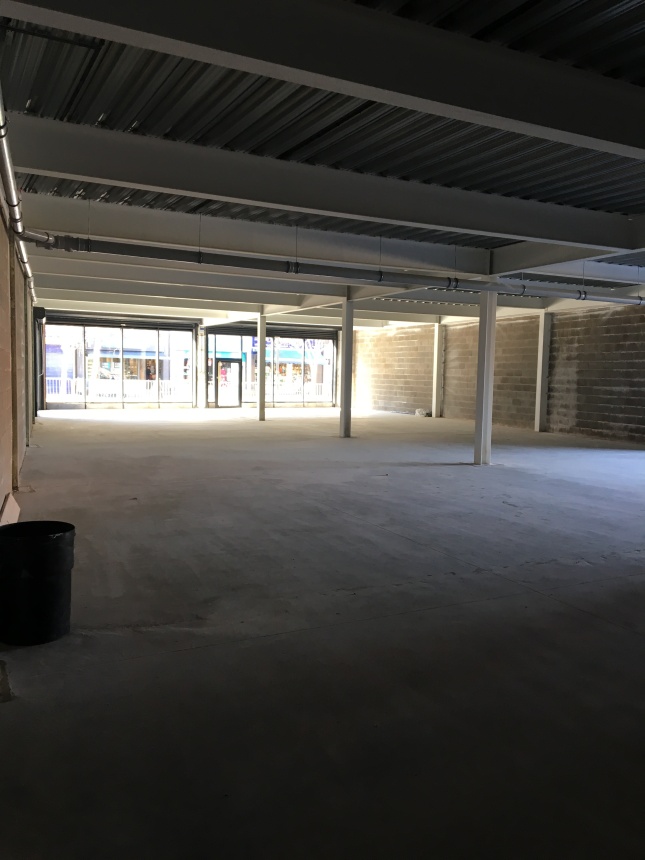 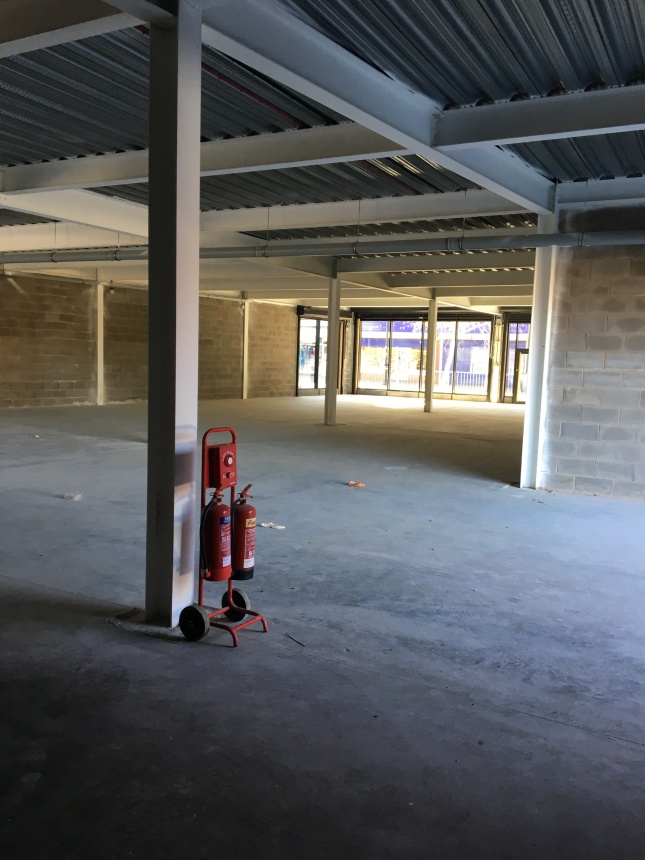 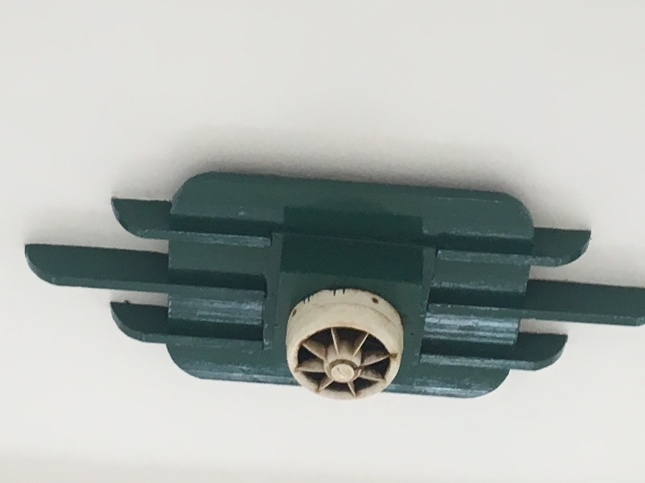 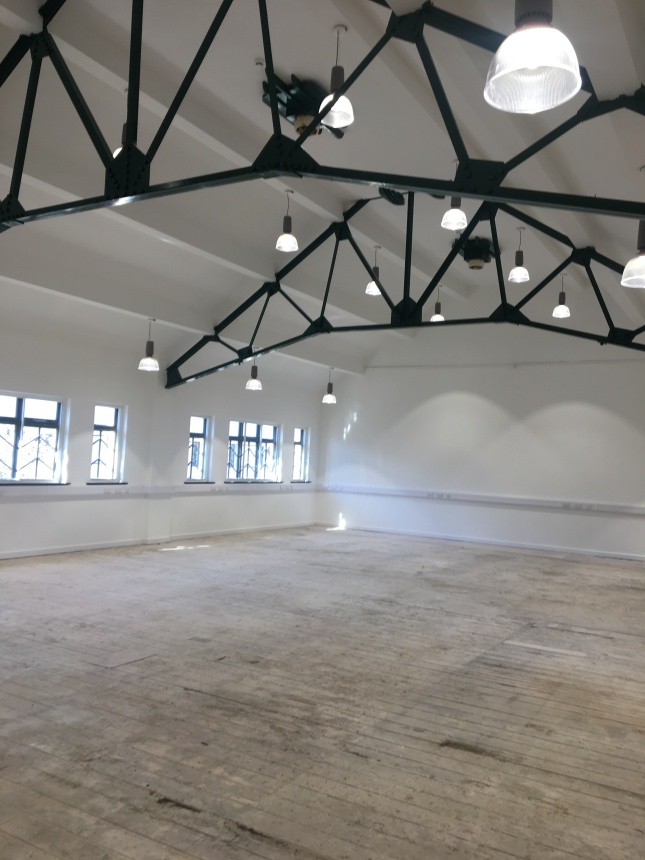 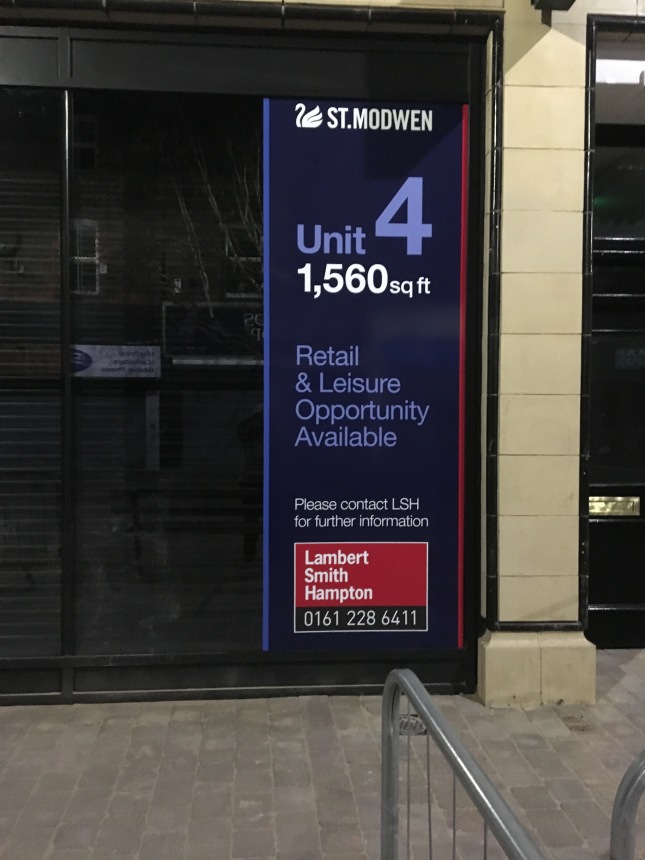 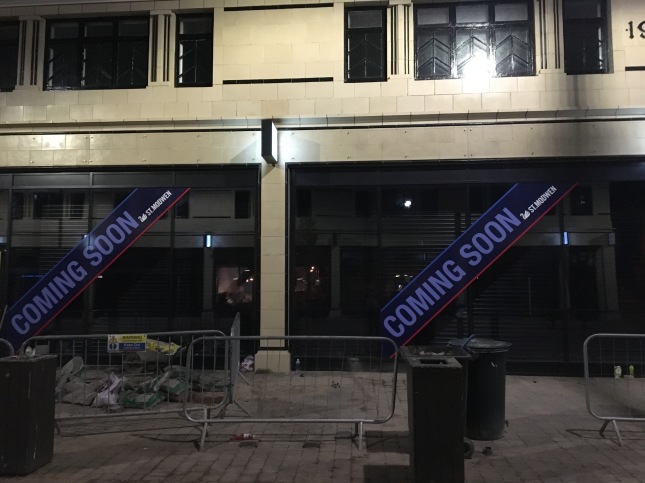 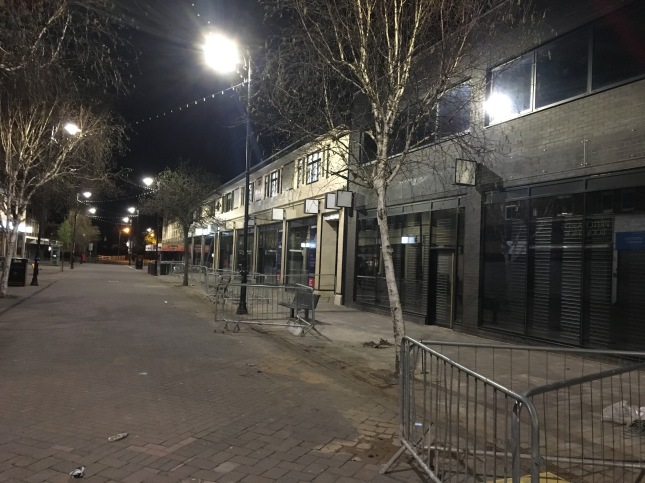 UPDATE 17/4.  Work is forging ahead on shop fitting for unit 2 GBS.     The work on the sets is now expected to be complete on Thursday.

Scottish power delayed completion by three months and now they have finished the demolition screens have begun to be removed from 11/4/18. The work relaying the Sets by Glenn Buildings is scheduled to end by Wednesday so those screens may not come down until then. 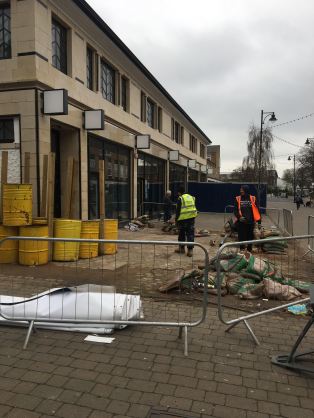 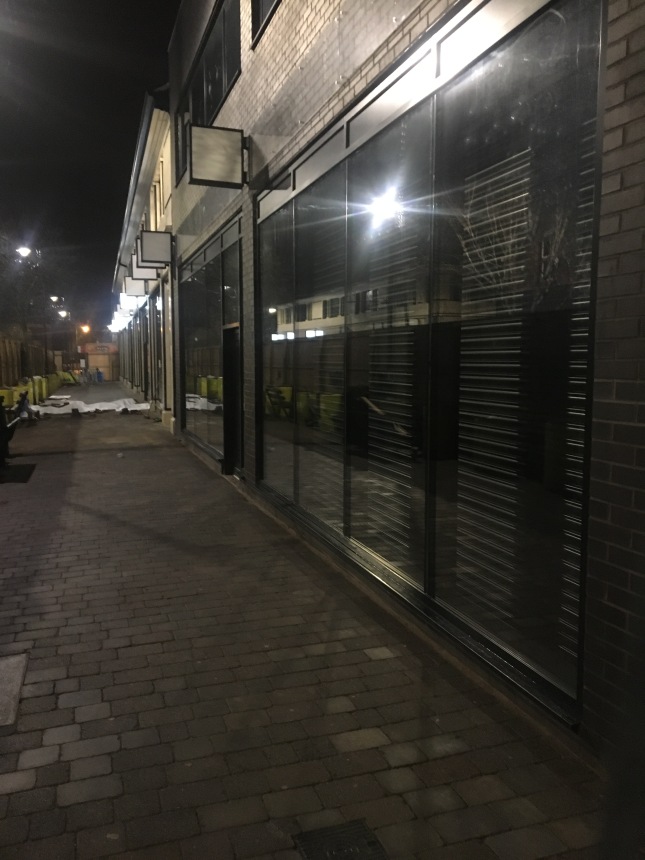 Click on the business name links in the text below for more information.

NEW BUILDING: Peacocks will take over the ground floor of the new build with The Village Vets on the first floor. This unit has a Lift. A new fire escape exits from the vets onto unit 4a (the former Community Club)

GLENN BUILDINGS NORTH:  The Blues Bar remain at unit 2. with new entrance and glazing. They  are opening a new sports bar in unit 1. Bet Fred are moving to Unit 3.  The top floor has been stripped back and a lift installed. The space covers the whole building footprint and including ancillary areas, totals around 2,500 sq ft

TELEGRAPH HOUSE:– St Modwen have not released any plan for this as yet. They do intend to develop perhaps re-build. At present their plan only indicates refurbishment.